Lack of development leads to lack of job opportunities,
lack of means for living, and an uncertainty for future.
Poverty leads to deprivation and frustration.
This leads to retaliation and then to revolt.
Extremism or fundamentalism is a sort of retaliation
and rebellion against tyranny and oppression.

1.The basic incumbency of a nation or a society is to take care of the human rights of its people and keep them happy and satisfied. A disgruntled society may also lead to   instability of the nation. I have discussed briefly in my book the human rights and how can they be safe guarded.

2.The Constitution of a country is a sacred document to be revered and practiced by all (governments and the people) with utmost sincerity, devotion, honesty, and purpose of duty.

3. The basic spirit behind each Constitution is to upkeep the human rights of the people. It is a tacit and sacred duty of the State (government) to dedicate itself in fulfilling these objectives with honesty and in as short a period as possible.

4.I have provided brief descriptions of a few worthy Constitutions to understand the purpose of a Constitution. A Constitution not implemented in true letter and spirit can become a bane for the people. India is a simile of it!


Rebellion in the making

By 2015- 2016 situation worsened and we faced severe turmoil in the country due to;
- Anti-national slogans by the students of JNU (JawaharlalNehru University, Delhi) (2016).
- Mr Asaduddin Owaisi , MP and President of the All India Majlis-e-Ittehadul Muslimeen said he won't chant, 'Bharat Mata Ki Jai' (March, 2016).
- It was shocking that just when our soldiers were fighting the militants a group of people chanted 'anti-lndia' and 'freedom for Kashmir' slogans a short distance from the site (22/2/2016).

All this is rebellion in the making and demonstrates the lack of development, lack of job opportunities and rising hardships, frustration and despondency of our people.

The rebellion cannot be suppressed unless the causes of rebellion are addressed.

Disintegrating Fraternity and Integrity of the Nation

Without creating tangible and lasting means of livelihood aversion to governments shall keep rising. Partisan thoughts and withering brotherhood (fratricidal instincts) culminate in the polarisation of the nation. It is a dangerous indicator of communal divides and fragmentation of the nation.

OUR DISGRUNTLED PEOPLE
( Rebellion in the making) 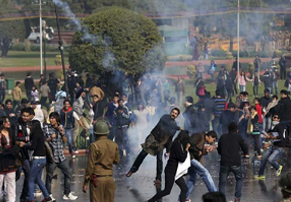