I recently laid my hands on the the book "India in Shambles - Only The Judiciary Can Save Us" by KC Agarwal. When i laid my hands on the book, i had my doubts, but believe me they were all dispelled by the depth of the research and the simple yet novellness of the ideas presented in this neat book. The Book is written in two parts. Part one talk about diagnosing the maladies ailing our nation and to determine their tangible cures. Part two of the book talks about Building the nation. Here ther author provides the roadmaps and guidelines to place the nation amongst the most prosperous and powerful nations in the world by making optimum use of our resources. Throughout the book, KC Agarwal points to an honest attempt at providing a Responsible and Accountable System of Governance for the people of India and fulfilling the basic objectives of our struggle for freedom. The book and with further extension the author believes that the tough geo-political scenarios that India and Indians are facing is the result of vote bank politics and if the judiciary is given enough power, it will be able to solve this. To a certain extent i do agree with the author, however there is and cant be a silver bullet to the problems that India is facing on multiple fronts. Yes, judiciary may solve a few. This book i must say is a rarity in today's times and points to ways we can end if not all, then at least some of the bigger challenges that the country and its common people are facing. I hope that this book gets wider coverage in the press and the likes of our politicos look at the simple yet practical examples of how we can get India back on track and the smile back on Indians.

Recently published book India in Shambles by renowned author KC Agrawal points to a genuine attempt at providing a responsible and accountable System of Governance for the people in India and fulfilling the basic objectives of our struggle for freedom.

The depth of the research and the simple yet original ideas presented in this book by the author provides roadmaps and guidelines to place the nation amongst the most prosperous and powerful nations in the world by making optimum use of our resource. The author is an electrical engineer and senior member of IEEE, USA, has had more than 33 years of experience in different capacities - in Academics, PSUs, and Multinationals. Some 20 years ago, greatly moved by the country's highly dreadful condition and the sight of poverty stricken people, he pledged to do something for the nation and steer the people out from their somber plight to a glorious future. The present work is the next step in furtherance of this cause.

The author feels that the elections that happen every five years at State or Union level are a way to measure the performance and accountability of our Legislature and elected Executive. Election is a sacred process to set up governments to work for the people and carry out development of the nation. But our kind of elections negates the basic element of accountability due to the trickery of allurement and appeasement practiced by political parties and candidates without any impediment. It masks their performance and shifts the focus from constructive work to reliefs, dole-outs and allurements of quotas and reservations, or to accusing the rival parties and candidates for projecting themselves superior over the others.

KC Agrawal also shows his concern on the issue of 'freebies' in election seasons. According to Agrawal, the purpose of establishing governments is to develop the nation and empower people naturally. Elections are a process to elect worthy guardians to establish responsible governments capable of fulfilling the socio-economic requirements of the Constitution (Article 38). Article 38 is fundamental in the governance of the country (Supreme Court). Freebies allure the voters and the most derogatory effect of it is laxity and impunity of our legislature and the entire government machinery down the line. Consequently it germinates 'no accountability' and 'no responsibility' in our entire governing system that is responsible to push the nation to the present state. Instead, it should be necessary for all Political parties and candidates to state their active developmental plans to alleviate the miseries of the people naturally, and attempts to fulfil the basic objectives of the Constitution.

Readers of his books have expressed great enthusiasm for the project and hope that the politicians will comprehend the findings of the book and provide a responsible system of governance for the people of India.

Agrawal, a renowned author of many books has suggested several models for development and those who are in any way concerned about the well being of India, the book is a must read for them - The Political and Business Daily.

Author KC India in Shambles - Only the Judiciary can save us

Crusade India launched the book INDIA IN SHAMBLES, ONLY THE JUDICIARY CAN SAVE US by K.C. Agarwal on the 7th of March, 2014 at the Press Club of India, New Delhi. Present at the ocasssion were distinguished personalities like Dr. SY Quraishi (Ex-Chief election commissioner), Mr. Sunil Sethi (Social Activist) and Mr.Vijay Jolly (BJP- All India in charge of Tripura). It was an interactive event with heated discussions about the views of the author on the Indian constitution during post-independence era. According to Mr. Agarwal good governance is like a mother who works hard for her living and nurturing her children.. The book attempts to find out that mother for the people of India with the help of learned judiciary. He states that establishing the government is a matter of the Constitution and the Constitution is above the Parliament and Judiciary is the Custodian of the Constitution.

Mr. KC Agarwal gave a heartwarming inaugural speech and welcome the guests and panelists. Apart from the guests, were eminent speakers Mr Deepak Singh (Editor Indian Observer), Mr K S Ahluwalia (Executive Coach and Mentor- Excalibre) & Mr K Siddhartha (Earth scientist, Mentor and Author). Through the entire evening, the focus of the discussions about the book was on India's progress through electoral reforms. The book was then released by the panelists present, and expert comments were given by Dr. SY Quraishi. The book received the much needed political and media recognition. People were encouraged to tweet about their views on the book after they have read it. All in all, the program was replete with spectacular group of people and Mr. Agarwal bringing alive the atmosphere with remarkable discussions. 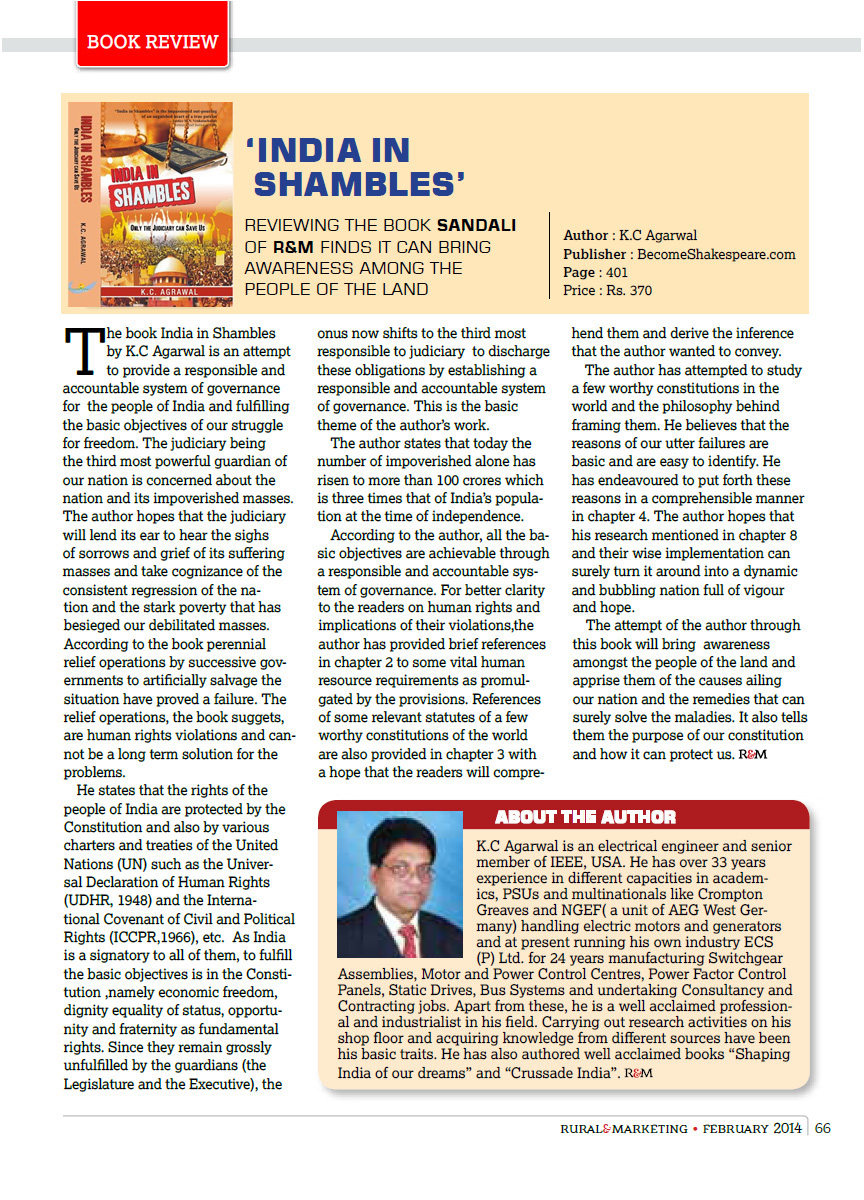 PBD BUREAU NEW DELHI, JAN 22 RECENTLY released book' India in Shambles Only The Judiciary Can Save Us,' by KC Agrawal strongly advocates 'system' overhauling to make the country prosperous and powerful.Agrawal, a renowned author of many books on Engineering and Indian economy has tried , with the support of his indepth research, to provide a detailed account of people's plight as a nation and policy paralysis,. He also suggested everal model for developments.' Activism' is in full swing these days and those who are any way concerned about well being of India, the book is a must read for them.